31 Oct:  Cloudy with a few sunny intervals mainly at midday.  Winds moderate west to north-westerly.  A third Yellow-browed Warbler for the month, was observed at Europa Point, in grassy scrub west of the Mosque, together with Chiffchaffs. 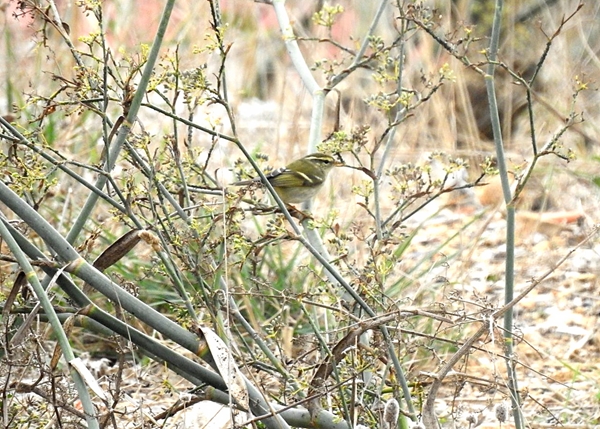 At Signal Station Road, there were 3 Song Thrushes, 4 Black Redstarts, 4 Robins, 2 Chiffchaffs, a Firecrest, a Raven and strong passage of finches, including several Siskins.

30 Oct:  High cloud throughout the day.  Winds light to moderate westerly.  A total of 68 new birds were ringed at the Observatory

29 Oct:  Clear skies with a light to moderate then to fresh south-westerly wind. Some fog developing mid morning in the south of Gibraltar and the entrance to the Bay.  Windy conditions prevented any ringing today.

28 Oct:  The Rock was shrouded in mist early in the morning, but lifted an hour later.  Overcast skies with cloud from the west but clearing in the afternoon.  Winds light variable changing to a light to moderate westerly by evening.  A total of 205 birds were processed at the Observatory in the morning.

27 Oct:  Heavy levanter cloud over the Rock lifting by the afternoon.  Winds moderate easterly.  A massive fall of migrants occurred overnight, and at first light birds were moving up the Rock and catching in the mist nets which were heaving with the weight of birds.  Only two rounds were achievable with nets closed by 10am, as numbers were too great.  Another visit to the North Front Cemetery culminated in a surprising weekend of firsts for Gibraltar with 2 Rock Sparrows* seen.

A total of 302 birds were processed at the Observatory in the morning.

26 Oct:  Heavy levanter cloud over the Rock clearing by the afternoon.  Winds moderate easterly.  Easterly winds marked the return of a fall of migrants on the Rock with 283 new birds ringed at the Observatory.

A flock of 11 Cormorants flew south over Europa Point at midday.  A visit to the North Front Cemetery proved fruitful with a fall of migrants that consisted of 21 Meadow Pipits, 30 Black Redstarts, 2 Common Redstarts, 3 Robins,  6 Blackbirds, 3 Sardinian Warblers, 2 Chiffchaffs, 3 Serins and a surprising Snow Bunting*, a first record for Gibraltar. 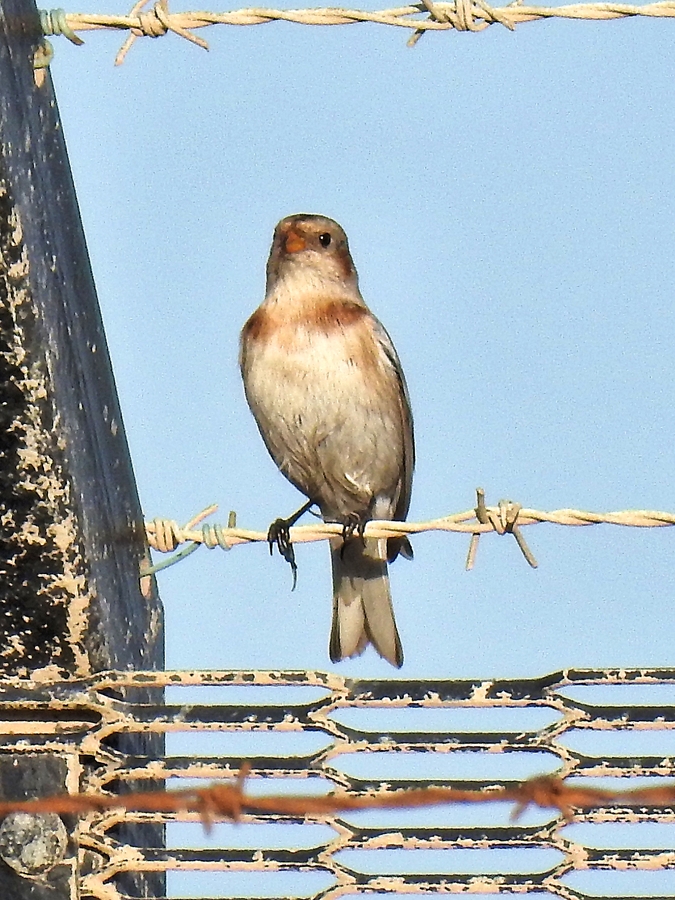 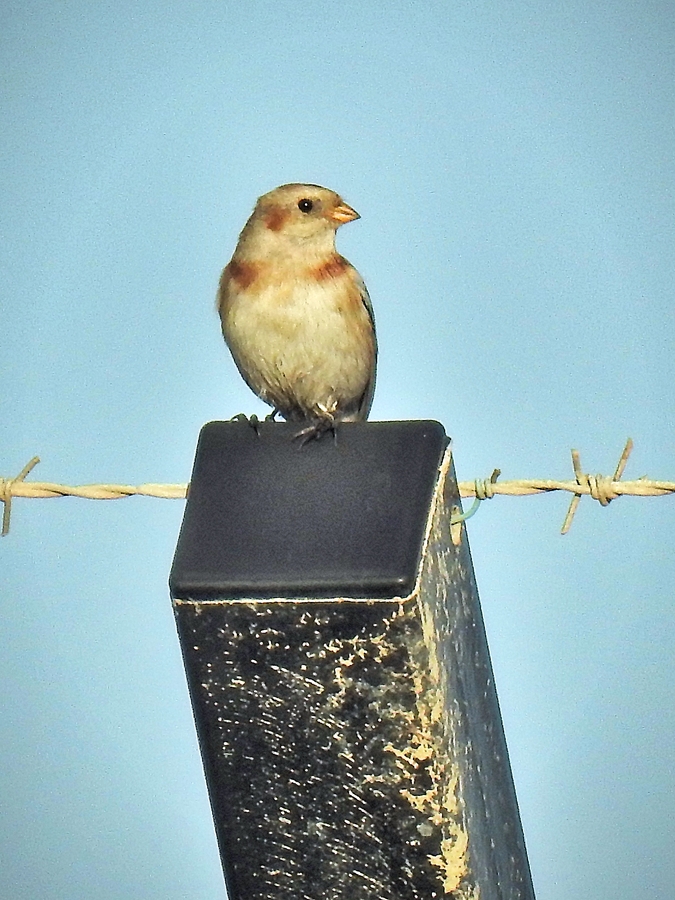 25 Oct: A Grey Heron called from Rosia Bay whilst still dark and a Tawny Owl was calling at Jews’ Gate.  There was some nocturnal passage of Song Thrushes over Rosia Bay in the early morning and a Black Redstart.  At the top of Windmill Hill there were 8 Black Redstarts, 8 Greenfinches and 5 Serins.

Present at the western end of the runway were 2 Grey Herons, 3 Cormorants, 2 Ringed Plovers and a Spotless Starling.  A Common Sandpiper was observed at Little bay and 16 Black-headed Gulls were present below Europa Point.

24 Oct: Clear skies with a fresh north-west wind.  A flock of six Song Thrush flew over Grand Parade in the early morning. Two Yellow-browed Warblers and a Kingfisher were at the Alameda Gardens.  153 Griffon Vultures and three Short-toed Eagles were over the Rock during the late morning.  A visit to North Front Cemetery yielded a male Common Redstart, two Northern Wheatears, two Stonechats and a Whinchat.  A Tawny Owl called from The Mount.

Windy conditions marred the catch at the Observatory and only 13 new birds were ringed.

23 Oct: A Common Nightjar and two Yellow-browed Warblers at the Alameda Gardens.  Another good day at the Observatory with 134 new birds ringed which included a Greenland Wheatear, 2 Common Redstarts and a late Whitethroat.

22 Oct: The Yellow-browed Warbler was still present at the Alameda Gardens.  Migrants continued to pick up with 161 new birds ringed at the Observatory and included a superb Bluethroat and Firecrest, and late trans-Saharans with Grasshopper, Reed  and Willow Warbler.  Robins finally arrived in numbers, and Black Redstarts were beginning to appear at last.

A Tawny Owl was heard calling from the Mount gardens.

21 Oct: A Meadow Pipit and a Skylark flew over Europa Foreshore, which held four Northern Wheatears of the Greenland race, a Black Redstart and a Robin.  Some 100 Cory’s Shearwaters rested just offshore.

An improvement in thw weather produced a small fall of migrants which included some late trans-Saharans, with two Common Redstarts and a Whitethroat for 134 new birds ringed.

19 Oct: A visit to Windmill Hill Flats yielded four Song Thrushes, two Common Chiffchaffs, eight Stonechats, a Blue Rock Thrush, a male Black Redstart, two Northern Wheatears of the Greenland race, five Greenfinches, one Goldfinch, two Linnets, two Ravens and 18 Barbary Partridges.  The Talus slope on the east side held another Stonechat and 11 Barbary Partridges. A White Wagtail and a Grey Wagtail were at Western Beach, where hirundines overhead included a Barn Swallow, five Red-rumped Swallows and some 15 Crag Martins.  A Grey Heron was on the edge of the runway here and a Great Cormorant was on the runway groyne at Eastern Beach.

Only  37 new birds were ringed at the Observatory, due to westerly winds.

18 Oct: A Sparrowhawk flew south over Devil’s Tower Road.  A total of 50 new birds were ringed at the Observatory.

17 Oct:  Clear skies with a moderate westerly wind.  The Yellow-browed Warbler was still present in the same location, and a Mistle Thrush was observed flying towards the Dell in the Botanic Gardens.  A total of 75 new birds were ringed at the Observatory.

16 Oct:  Clear skies with a cold light north-westerly wind.  Grey Herons are still present along the coastline to the east and west of the Rock.  The Yellow-browed Warbler was back in the carob tree and was joined by a second one in the afternoon! A Barn Owl near Jacob’s Ladder in the evening.

15 Oct:  Clear skies throughout the day. Winds moderate westerly.  A total of 61 new birds were ringed at the Observatory.  Single Black Kite and Sparrowhawk were seen overhead.

The Yellow-browed Warbler* was relocated this morning,  in a Carob tree at the Botanic Gardens.

14 Oct:  The end of the easterly winds this morning, with two warm fronts approaching Gibraltar, with some rain showers on the way.  Mainly clear in the afternoon with some westerly cloud.  Winds fresh north-westerly to westerly.  A Yellow-browed Warbler* was heard calling twice at the Botanic Gardens.  It later reacted and replied to playback and was seen by two observers.  A male Common Redstart was seen at the North Front Cemetery, and a Song Thrush overflew the Botanic Gardens.  The windy conditions proved unsuitable for ringing and only three birds were trapped before the nets were closed.

13 Oct:  Overcast skies with a heavy levanter cloud.  An Eleonora's Falcon was seen with another Falcon sp. before flying across the Bay.  In the afternoon 5 Booted Eagles 2 Short-toed Eagles a Black Kite and an Osprey were observed from the Observatory.  Crag Martins and a Red-rumped Swallow were also seen in the morning from the Observatory.  A total of 174 new birds were ringed.

Off Europa Point at least 2000 Cory's Shearwaters were feeding on flying fish which were chased by large numbers of Blue-fin Tuna that have been present in Gibraltar waters for several months now.  Also seen were 4 Great Skua, 5 Black-headed Gulls , a Common Sandpiper and 5 Sandwich Terns.  A Marsh Harrier flew south over the Europa foreshore and 2 Turnstones were present at Camp Bay.

12 Oct:  Heavy levanter over the town and harbour clearing in the afternoon to give sunny and warm spells.  At midday 7 Booted Eagles and 8 Short-toed Eagles flew over the Rock.  A good catch at the Observatory with 123 new birds ringed.

Two Grey Herons were present in Rosia Bay, and a Night Heron flew over Waterport in the early hours of the morning. A very late Bonelli's Warbler was photographed at the Botanic Gardens.

11 Oct:  Heavy levanter cloud over the area with moderate easterly winds.  Blackcaps dominated the catch at the Observatory, but Robins had yet to arrive in numbers.  A flock of 11 Black Storks flew into the cloud in the Nature reserve before returning north.  A Spotted Flycatcher was observed at the North Front Cemetery.

10 Oct:  Overcast skies with a heavy levanter cloud.  Winds moderate to fresh easterly.  Four Cormorants and 2 Grey Herons were present at the western end of the runway.

An evening count at the  Gorham's Cave World Heritage observation site produced a few Crag Martins, 2 Ravens, a Grey Heron, an Osprey setteling to roost on the stairway down to Gorham's Cave, and an exceptional count of 26 Shags; a Gibraltar record.

A total of 117 new birds were ringed at the Observatory.

9 Oct:  Levanter cloud over the town and harbour in fresh easterly winds.  A total of 83 new birds were ringed at the Observatory.

8 Oct:  Cloudy skies with a levanter cloud over the town and harbour.  Fresh easterly winds.  A Northern Wheatear was observed at North Front Cemetery.  At the Observatory a total of 52 new birds were ringed.

7 Oct:  Clear skies with a moderate to fresh westerly to south westerly.  Most trans-Saharan migrants have now left, and wintering birds begin to arrive.  Most will have overflown the site with clear skies and only 32 new birds were ringed.

A Spotted Flycatcher was still present at North Front Cemetery.

Only 27 new birds were ringed at the Observatory.

A flock of 6 Grey Herons were seen heading north along Rosia Bay.

5 Oct:  Clear skies but becoming overcast over in the afternoon with high cloud.  Winds north-westerly in the morning with a south-westerly bearing down the Strait in the afternoon.Today was Eurobirdwatch day, and a walk along Engineer Road to Jews' Gate produced 2 Song Thrushes and 7 Barbary Partridges.  There was some soaring bird migration too, with a Marsh Harrier, a Short-toed Eagle, three Honey Buzzards and six Black Kites.  Two Ravens and a Grey Heron also flew by and there was a trickle of Barn Swallows.   A total of 52 birds were processed at the Observatory.  A Whinchat was present at North Front Cemetery.

4 Oct:  Clear skies with a light and variable to light westerly.  An evening watch from above Gorham's Cave World Heritage Site produced 20 Shags, 2 Cormorants, a Grey Heron and a Little Owl calling from the cliffs above.

3 Oct:  Clear skies with a fresh west to north-westerly wind.  Winds were to strong to open nets at the Observatory.  In the evening 10 Honey Buzzards a Sparrowhawk and a Booted Eagle were seen heading south over Europa Point.

At Europa Point over 800 Cory's Shearwaters were present offshore feeding on flying fish with Blue-fin Tuna chasing the shoals.  Also seen were a 3 Gannets, and adult heading east and a juvenile and a second year west, a Great Skua, a Cormorant,  single Lesser Black-backed Gull, 10 Black-headed Gulls feeding below the Point, 2 Common Sandpipers and over 100 Swallows flying off the sea and heading north, following the coastline.  At North Front Cemetery single Spotted Flycatcher and Willow Warbler were seen.  At the Botanic Gardens single Common Redstart and a Pied Flycatcher were observed.

2 Oct:  Clear skies with a moderate to fresh north-west wind.  Two Grey Wagtails and a Pied Flycatcher were present at Commonwealth Park.  Windy at the Observatory and only 13 birds ringed.

1 Oct:  Sunny spells with lots of high cloud.  Winds light to moderate westerly.  A Pied Flycatcher and a Robin were present at Commonwealth Park.  At the Observatory 64 birds were ringed, with the main species, Blackcaps again.